Where are the preachers?

Shortly before His ascension, Jesus commissioned His disciples to teach everything He had taught them to all peoples in all places and to make disciples of as many as would hear and heed. Then He added, “… and lo, I am with you always, even to the end of the age" (Matt. 28:19).

Where are they? Can you see them? I can’t. Do you hear them? I don’t. Who is Jesus with right now?

If we are to take Jesus’ words to mean that from that time until His return in glory His message, and the message about Him, would be preached without let, we have a problem. Because it’s not happening. Either that, or I am spiritually blind. How about you?

True, you will find endless web sites such as this one where sincere believers seek to glorify God, share their knowledge of His plan of salvation, and to convict others of the atoning power of Jesus Christ’s sacrifice. But can it be truly said that they are numbered amongst those whom Jesus is “with to the end of the age”? No. They could more accurately be characterized as beggars telling other beggars where they have found bread.

Church organizations abound, each of which has its set of doctrines and beliefs and all of which confess Jesus Christ as Lord and Saviour. But be honest. Can any of them truthfully say, “We are preaching Jesus Christ and Him crucified” (1Cor. 2:2)?

Paul spoke bluntly with the congregation in Rome about the essential role played by preachers in bringing truth to all peoples:

Again we ask, do you hear them?

Some people believe that preaching can be wordless in content, that their good works somehow qualify as a form of preaching. For one thing, the notion that true preaching can be silent is insupportable. When Paul journeyed to far-off places with the truth of God, he didn’t serve soup to the poor at his destination. He found an audience and hammered it with words of truth. For the first thirty years of His life, Jesus lived the perfect godly life. How many disciples did He make? Preaching requires that a preacher preach. Paul also added a vital bullet point:

And how shall they preach unless they are sent (vs. 15)?

Much evidence could be adduced to show that God does not object to individuals sharing their beliefs and faith with others and honours their efforts. This site takes as its “authority” to speak about God and His mighty works from passages such as Psalm 105:1-3. However — and this is the crux of the matter — inspired preaching that will result in hearts turned to God is restricted to those whom God in His sovereign will has chosen, authorized and sent. Speaking of this verse from Romans, Leon Morris says,

The notion of  a higher authority is implicit in the concept: a self-appointed herald is a contradiction in terms. Paul is saying that the preaching of the Christian message is impossible without the divine commission. A herald can have nothing to say unless it is given to him. The gospel is derivative. It does not originate with preachers, and the other side of the coin is that nobody can operate as a preacher in the sense in which Paul is using the term here unless God has sent him (The Epistle to the Romans, p. 390).

Back to the main point. This blog seeks to reconcile the notion that Jesus promised that He would have and be with His authorized spokesmen at all times with the stark reality of deafening silence. Can you hear the dynamic preaching of a Spirit-led agent of Jesus Christ booming out loud and clear, “Repent, sinners, and turn to the Lamb who takes away the sin of the world”? Is anybody trumpeting, “The kingdom of heaven is at hand; repent, and believe the gospel”?

We can say on good authority that the gospel is not being proclaimed today. What authority?

Assuredly, I say to you, wherever this gospel is preached in the whole world, what this woman has done will also be told as a memorial to her (Matt. 26:13).

A divinely appointed preacher will recount in his proclamation of the saving work of Jesus Christ the unconditional devotion, love, and gratitude of Mary as an exemplar of discipleship. Do you hear it?

When Jesus commissioned His disciples, He was not foretelling unbroken preaching of the gospel to the very end. For He also said,

I must work the works of Him who sent Me while it is day; the night is coming when no one can work (John 9:4).

Though much uncertainty surrounds this mysterious saying of Jesus Christ, it does suggest times of impenetrable darkness would come during the course of history when no man could preach because none had been sent, when the door would be closed and no man could open it. Though believers feel distraught over the silence, they remember that, if it is of God, even silence is golden. It has its purpose. When the time is right,

… this gospel of the kingdom will be preached in all the world as a witness to all the nations, and then the end will come (Matt. 24:14).

Please, Lord, may the time be right soon. 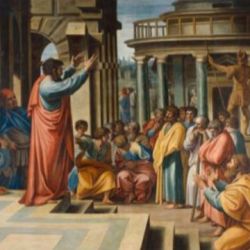