Jesus’ blood is worth more than all the wealth in the universe. In some real way, He made the universe and everything in it. His life is worth more than the sum total of all lives of all human beings who have ever or will ever live. He never once thought an evil thought. He never once succumbed to temptation. In Him dwelt all the fullness of His heavenly Father in bodily form. In Him was the love of God personified, manifested most fully in His willingness to suffer and die for us, miserable creatures that we are. To this day, few could care less about His atoning work. What a testimony to His infinite love and self-control that He so patiently waits for the time — which will come — when human beings finally come to their senses, with His help, and cast themselves at the foot of His cross.

Today the majority opinion holds that either Jesus never existed or, if He did, the Gospel accounts of His mighty works are… well… just a tad exaggerated. Don’t be numbered amongst the blind followers of the blind. Raise the cup of salvation and worship the resurrected and glorified Jesus in spirit and in truth. He loves those who love Him, and will raise them from their graves and welcome them with open arms into His everlasting presence upon His return. He will walk with them and talk with them, one on one.

As for the rest. Well, they will stand before Judge Jesus on the day of judgment. Those who have shown no interest in Him will have to account for their apathy. Those who hate Him will receive just retribution. But through it all, His intention is to bring all to repentance that they, too, may come under His atoning blood and, ultimately, join those whom He raised upon His return into the kingdom of God. At His right hand will be pleasures evermore. 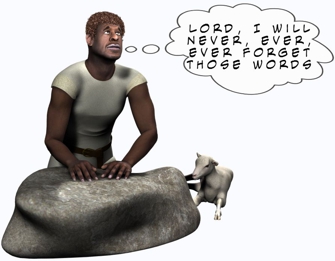