Take with a dash of salt

A majority of stars are actually twins

Folks who believe that the universe and everything in it were created by God invariably are shocked when they learn that the majority of stars they see in the night sky are younger than the universe’s purported age of around 13 billion years. If God did not create them when He created the entire universe, where did they come from? The stunning answer is that stars develop over time inside wombs of massive clouds of mostly hydrogen gas through a process of gravitational collapse. At a certain point, after maybe billions of years of gestation, a star is born. That process, they tell us, remains ongoing to this day. Astronomers have pinpointed numerous stellar nurseries where, they assure us, we can watch the process in action.

Eventually each star becomes infirm through old age and then “dies” in one of several ways, the way depending on the star’s mass.

Once the shock wears off of learning that stars, like human beings, go through a cycle of life and death, believers cannot help but be overawed by the phenomenon. Then awe morphs seamlessly into worship. For those who decide to learn more, the phenomenon provides robust support for their belief in the divine origin of all things. For they soon discover a couple of magisterial truths.

First, the process, in those cases where the evidence strongly suggests star formation is currently occurring, is as mysterious and wondrous as is the gestation and birth of a human baby. (Just read the Wikipedia article on star formation for yourself.) The notion that either process evolved by natural means is exposed as utterly facile.

Second, the belief that all stars came into being by such a natural process stretches credibility beyond breaking point. You would never know from reading the highly technical treatises on star formation presented with supreme confidence that “…even now there is no very good theory of how stars are formed” (Roger Taylor, The Stars: Their Structure And Evolution, p. 5). Admittedly, this was written in 1994 and much has been learned since then. But so many problems remain that one has good reason to believe that probably most stars in most galaxies required divine “meddling” in natural processes, themselves the result of divine creation, to pull it off. As the prophet Isaiah reports,

Lift up your eyes on high, and see who has created these things, Who brings out their host by number; He calls them all by name, by the greatness of His might and the strength of His power (40:26).

The book of Genesis depicts creation as ongoing right up until Adam and Eve were made, and the language in this verse ("brings out") strongly implies that the creation of stars involved a dynamic process rather than a rabbit-out-of-the-hat trick.

A major challenge for star formation theories is this: “Star formation theory, as well as accounting for the formation of a single star, must also account for the statistics of binary stars…” Believe it or not, more than four-fifths of the single points of light we observe in the night sky are actually two or more stars orbiting together. Perhaps us lay folk can wrap our minds conceptually around the thought that, well, a huge molecular cloud of dust and gas could collapse under the force of its own gravity and somehow spontaneously ignite, but to ask us to unquestioningly swallow the notion that this same theory can explain twins, known as binary systems, that harmoniously revolve around a common centre of gravity is to expect too much of us. Especially when you consider the staggering variations on this theme that exist.

Sometimes you have triplets. In 2016, astronomers discovered a three-star system with a planet orbiting the largest of the three (Surprising planet with three suns discovered). Let unbelievers invoke God-of-the-gapism if they wish, but the simple fact is that attempts to explain such a setup as arising entirely by natural means is tantamount to an insult to one’s intelligence in exactly the same was as is trying to convince us that the human brain, speech, sex, photosynthesis, spider silk and bum-breathing in the Fitzroy River turtle came into being through random mutations.

Another example: in the binary system J0806, two white dwarf stars orbit one another every 321 seconds. Scientists think the stars, about 1,600 light-years away, are spiralling in toward one another and will eventually merge. Gravitational collapse of molecular clouds again?

We are not even going to attempt to deal with the difficulty of accounting for the existence of accompanying disks of gas surrounding each star (circumstellar disks) as well as separate disks surrounding the complex (circumbinary disks). However, notice this recent discovery:

Astronomers spotted a pair of massive baby stars growing in salty cosmic soup. Each star is shrouded by a gaseous disk which includes molecules of sodium chloride, commonly known as table salt, and heated water vapor. Analyzing the radio emissions from the salt and water, the team found that the disks are counter rotating.

No doubt some genius will come up with a “rational explanation” for counter rotation. And where did the salt and water come from? Where did the colossal primordial molecular cloud nab it? You do not need to feel intellectually inferior for preferring a more rational explanation — a genius planned and created this and many, many other bizarre binary systems. 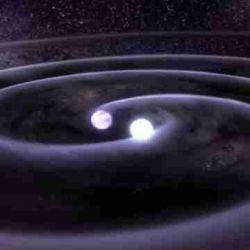