The scales of justice perfectly balanced at last

When George Floyd, a black man from Minneapolis, walked out of his door on May 25th, 2020, he had not the slightest inkling that he would be dead within hours and that his death would set off an explosion of grief, indignation, anger, violence and sheer insanity that would reverberate around the world for weeks to come. The incident occurred when police picked him up on suspicion of passing a counterfeit $20 bill. He passed out and died when one of the arresting officers — white, of course — kneeled on his neck for nine minutes.

Human beings have been oppressing, victimizing, murdering, robbing and hating their fellow man since creation, sometimes, as during the Holocaust, on an industrial scale. The desire for vengeance on the part of victims is understandable. But it is never going to happen in this evil age.

Here is the good news, though. The scales of justice will, in God’s good time, be evened completely. Perfectly. Every victim of every injustice ever committed will be compensated. Africans snared in the slaver’s net, separated from loved ones and transported across oceans to labour in rich peoples’ sugar and cotton plantations will be recompensed — in the flesh. Their descendants, likewise, will receive appropriate payment for any disadvantage incurred because of their lineage. The slave dealers will be severely punished for the unimaginable afflictions they have inflicted on their victims — in the flesh. Their descendants, likewise, will break their teeth on the silver spoon they were born with. Not more than they deserve, mind you. The accounting to be made will be perfect. The scales of justice will settle not so much as a smidgeon either side of dead even.

How can this be? When will this be? Believe God’s word.

Beloved, do not avenge yourselves, but rather give place to wrath; for it is written, "Vengeance is Mine, I will repay," says the Lord (Rom. 12:19).

Then I saw a great white throne and Him who sat on it, from whose face the earth and the heaven fled away. And there was found no place for them. And I saw the dead, small and great, standing before God, and books were opened. And another book was opened, which is the Book of Life. And the dead were judged according to their works, by the things which were written in the books… And they were judged, each one according to his works (Rev 20:11-13).

In the blink of an eye after the lights go out, they will come on again. At the resurrection of judgment, Richard Dawkins’s commitment to atheism will last about, well, say, 30 seconds. Then every single person who has ever lived will meet Judge Jesus face to face. He will mete out justice on both the compensation and punishment side of the equation:

The LORD watches over the strangers; He relieves the fatherless and widow; but the way of the wicked He turns upside down (Ps. 146:5).

On the punishment side of things, Jesus came 2,000 years ago to pay for men’s sins. In the judgment, He will make people pay for their sins! How will Adolph Hitler pay in full for the torture and death of untold millions of people? Who can say? But it will not be pretty.

Recompense will be paid to all who have suffered through either the vagaries of time and chance or at the hands of a fellow man:

He raises the poor out of the dust, and lifts the needy out of the ash heap, that He may seat him with princes — with the princes of His people. He grants the barren woman a home, like a joyful mother of children. Praise the LORD (Ps. 113:7)!

Has Jesus forgotten the widow who paid her two mites into the temple treasury motivated by a desire to glorify God? Of course not! She will sing with joy to receive her righteous reward.

As well as maintaining the spin of every atom in the universe, Jesus is actively monitoring every human thought. He remembers every wholesome thought and every vile stirring. When He administers justice, His judgment will be infinitely just. 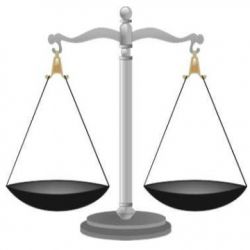