The mystery of missing rock

Genesis One describes the creation of the earth we live on in six stages. An abundance of scientific evidence proves that billions of years were involved. Believers ought to be thrilled to contemplate the stunningly complex array of cyclical geological processes that occurred during creation week and which have shaped the world we live in.

Numerous times, when sea levels were high and huge inland seas were the norm, the filling of those seas over millions of years by sediment eroded on distant mountains resulted in vast areas of deep layers, or strata, of sedimentary rock. Then, as the sea level dropped and the layers of rock were thrust upwards by tectonic forces, the miracle of erosion has, in various times and places, created an especial wonder — unconformities. These occur when the forces of erosion strip away millions of years’ worth of sedimentary rock, followed by the subsidence of the land, followed by a new era of deposition on top of the eroded remnant. An unconformity is created at the transition between the eroded column on the bottom and the newly created, layered column on top. Unconformities create gaps in the geological record.

A recent study has trained the spotlight on the world’s most famous unconformity — the Great Unconformity. “First noticed by John Wesley Powell in 1869 in the layers of the Grand Canyon, the Great Unconformity… accounts for more than one billion years of missing rock in certain places.” Let it be noted that one billion years is the upper limit for missing formations and is found in only a small part of the area involved. In other areas the gap amounts to a mere one hundred million years. The lower part of the unconformity consists of Precambrian basement rock, the original, primitive rock that remained relatively untouched from creation till about 540 million years ago, at which point “modern” geological processes described above came into play. (That is a rather simplistic summation, but let’s not get pedantic.)

Just think of it — hundreds of millions of years of strata washed away. What happened during those years? The study authors acknowledge that the, “… causes of the erosional event(s) and/ or depositional hiatus that lead to its development are unknown.” Translated: we don’t know what happened in any kind of detail. How can they? The very evidence they need to try to figure out what happened has all vanished. True, the material that was washed away is still “alive and well” somewhere, but who knows where? It may be incorporated into a new mountain range somewhere, be lounging around in the sediment at the bottom of the ocean, or even subducted into the mantle of the earth. Or a combination thereof.

The study may have cleared up at least one long-debated question surrounding the Great Unconformity; whether it occurred as the result of a single global set of conditions or of more localised conditions occurring simultaneously. They concluded it was the result of multiple, local tectonic phenomena, “rather than a synchronous global phenomenon”.

Genesis One tells us that God created all things on earth in six stages but provides only the dimmest outline and a very blurry picture of what transpired. Maybe that is all a believer needs to know about the matter for salvation, but Psalm 111:2 encourages us to delight in learning whatever we can in our allotted time about God’s mighty works. 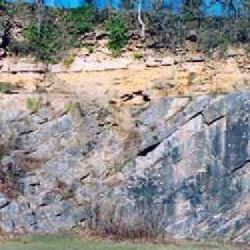