Do we show the same unconditional devotion towards God that we expect from our dog?

Everybody has heard of Greyfriars Bobby, the Skye Terrier in 19th-century Edinburgh that is reputed to have stayed by its owner’s grave for fourteen years before dying itself. Whether true or not, the story has added enormously to the reputation dogs enjoy of unreserved loyalty to their owners. Aldous Huxley famously quipped, “To his dog, every man is Napoleon; hence the constant popularity of dogs”. When you observe the behaviour of some dog owners, you cannot help but feel sorry for the dog.

We could get bogged down here in all manner of intriguing asides, such as the observation that canine loyalty is shown only to human beings, not to fellow dogs. Who ever heard of one dog sitting by the grave of another dog for long periods of time? Dog non-lovers will also point out that dogs will switch their devotion to a new owner in a snap, immediately forgetting their previous master. How’s that for loyalty?

Even if you understand that a dog’s loyalty and devotion is only an instinctive form of behaviour built into dogs by the Creator, taking Isaiah 1:3 as our guide, can we not be admonished by contemplating canine devotion?

The ox knows its owner and the donkey its master's crib; but Israel does not know, My people do not consider.

These words advise human beings to emulate the behaviour of such beasts with the obvious difference that we are to show unstinting devotion and faithfulness to our “owner” and “master” consciously, willingly, cheerfully. We could tweak Huxley’s observation thus: “To his dog, every man is God”. And herein lies our point: dog owners expect nothing less from their pet than to be viewed, loved and adored as if they were God. They expect that Cooper will sit patiently by the back door, tongue hanging out, liquid brown eyes watering over, waiting humbly to be let back inside after being expelled for misbehaviour. Owners would quickly lose affection for a beast that failed to show unconditional loyalty and unquestioning obedience. You can see where this is headed.

How can it be that we expect our dogs to love us with all their heart and all their “mind” when we have in reality done almost nothing for them while we, by contrast, show no love, no devotion, no faithfulness, no obedience to Him Who has given us everything? So, what can we expect Judge Jesus to say to us in the day of judgment? Perhaps something like,

I created the whole vast universe. Why did you not fear me?

I made you. Why did you not worship me?

I gave you rain, sunsets, snow, food, sex and beaches? Why did you not obey me?

I endured torture and death for you. Why did you not adore me?

Are you willing to be God’s dog? 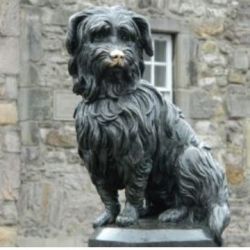