Upon a lonely hill

Jesus died for all. How many care?

The Saviour of all mankind was hanging on a cross — lonely, naked, shredded, wracked with savage pain, surrounded by a jeering mob, bracketed by common criminals. Hours later, He was dead. When the sun set that day upon a forever-changed world, almost nobody changed almost anything. Many were astounded and moved by what they had witnessed but gave not a passing thought to its meaning. They didn’t care about their sin. They didn’t care that Jesus had just offered them the most valuable gift they could possibly ask for — complete atonement for sin and sinfulness, including the propitiation of God’s anger, redemption from death, pardon for sin, justification from guilt, and reconciliation with God. And, ultimately, eternal life in the kingdom of God. Within hours, onlookers had slid effortlessly back into their self-absorbed routines, indifferent to the grace of God extended to them through the sacrifice of their Lord and Saviour.

Who understood? Who cared? How many grasped that they had witnessed the most significant event in the history of the universe, the most compelling testimony to the love God had for them?

But God demonstrates His own love toward us, in that while we were still sinners, Christ died for us (Rom. 5:8).

God’s love is of such magnitude that He was willing to suffer and atone for mankind’s sin even though He knew men would not care, wouldn’t feel a shred of gratitude, wouldn’t change anything. Jesus died for us even though He knew we do not care about our sin and wouldn’t be grateful. He knew that the sinners of the world would continue to walk their godless path without so much as a nod in the direction of the cross.

While Jesus was hanging on the cross in excruciating agony, how many spectators thought to themselves, “That shredded human shape hanging there in agony is in the process of dealing decisively with my sins so that I can have an intimate personal relationship with Him in His eternal kingdom?” Many joked about His impotence to save Himself. They blasphemed the one who, at that very moment, abandoned and forlorn as nobody else has ever experienced, was paying a ransom to rescue them from the consequence — eternal death — of their godless deeds and dead thoughts. How many dropped to their knees in overwhelming guilt and boundless gratitude? Perhaps not a single spectator thought of these words:

He was oppressed and He was afflicted, yet He opened not His mouth; He was led as a lamb to the slaughter, and as a sheep before its shearers is silent, so He opened not His mouth. He was taken from prison and from judgment, and who will declare His generation? For He was cut off from the land of the living; for the transgressions of My people He was stricken (Is. 53:7-8).

They didn’t care then, and “we” don’t care now. What a wonder that God in heaven did not clap His hands in disgust and consign the universe and us human beings to vapour. How does He still His burning zeal today?

The story is not over yet. Back then the grounds for our atonement were laid. The time is coming when God will implement that atonement for all who are willing to receive it. In the meantime,

Truly, these times of ignorance God overlooked, but now commands all men everywhere to repent (Acts 17:30).

Those who are willing to cast themselves at the base of Jesus’ cross now in bitter contrition can look forward to receiving glory, honour and praise at Jesus’ return and to being received into His dazzling presence to enjoy pleasures at His right hand for all eternity. For every one of us, very soon. 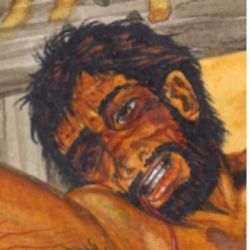