God loves your children more than you do. But…

In June 2020, the horrific death of a black man, George Floyd, under the asphyxiating knee of a white policeman in Minneapolis, sparked weeks of violent unrest in the USA which, in turn, spread rapidly to major European capitals. Overnight, three words — Black Lives Matter — in multitudinous fonts and spelling variants and in every colour imaginable, from nauseous green to greasy red, popped up like a rash on walls of buildings, buses, and trash cans at a pace that outstripped the spread of coronavirus in Wuhan.

The backlash, though nothing like what could be described as an equal and opposite reaction, from counter-activists outraged by the gratuitous violence of the mob, didn’t take long in coming. A few wraith-like figures scurried around nervously under cloak of darkness daubing their counter slogan — All Lives Matter — whenever they could find an appropriate backdrop in a deserted street.

Stop and ask. Which is it? Do black lives alone matter, or do all lives matter? We will argue here that the slogan to most faithfully reflect ultimate reality is this: no lives matter.

At one level, this catchphrase is false, a point easily established when you remember that human beings are created in the image of God. The simple fact of our being stamped with the Imago Dei imparts intrinsic value and marks us out as unique and in a special relationship with the Creator unattainable by any other fleshly creature, not even by dogs and cats. Yes, all lives matter. Taking this sublime truth a step further, we can say that all lives not only matter but that they have considerable derivative value, value imparted by God’s love for mankind, highlighted most clearly by Jesus’ willingness to die for us. And by His willingness to spend every moment with each of us, personally, into all eternity in the kingdom of God (1 Thess. 4:17).

Here's a nugget of truth that may be difficult to believe at first. God’s love is so much more intense than human love that — wait for it — He values your children and grandchildren more than you do. Isaiah expresses this astounding truth beautifully:

Can a woman forget her nursing child, and not have compassion on the son of her womb? Surely they may forget, yet I will not forget you (49:15).

With these vital preliminaries taken care of, consider now a less palatable truth, one we may frankly not wish to hear. Were it not for the high price tag God places on us because of His love and His brand upon us, we would be worth less than a penny. Well, not quite true. Were we reduced to our mineral components, we would fetch the pretty sum of about $600. Once again, Isaiah expresses the point with laser sharpness:

Behold, the nations are as a drop in a bucket, and are counted as the small dust on the scales; look, He lifts up the isles as a very little thing. And Lebanon is not sufficient to burn, nor its beasts sufficient for a burnt offering. All nations before Him are as nothing, and they are counted by Him less than nothing and worthless (40:15-17).

Doing simple arithmetic, each individual can be described as being worth one seven billionth of less than nothing. The Hebrew word for “worthless”, tohu, is used in 1 Samuel 12:21 where it is qualified with the words “which cannot profit”. I think we get the picture.

Why are human beings worthless and less than nothing? It’s not hard to grasp once one takes a God’s-eye view of us.

First, we are so transient, spending but a handful of decades in the land of the living before we fade and drop off our perch:

All flesh is as grass, and all the glory of man as the flower of the grass. The grass withers, and its flower falls away… (1Pet. 1:24).

If you live for, say, eighty years, your “glory years” of fitness, springiness and comeliness may amount to forty years. The rest of your time you are either a “silly child” or a rapidly deteriorating, meat-covered, bony frame. Sorry. Not trying to insult anybody. But that’s reality. And then you are gone. Within eighty years, not a single living soul will remember anything about you. God, by contrast “was, and is, and always will be” (Rev. 4:8, Rodney translation). He could tell you how many trilobites were plying the oceans and how many pterosaurs were soaring on high on any given day millions of years ago. (Not that they were around at the same time, but let’s not get pedantic.)

Furthermore, you and I occupy about 65 litres of space. God fills the entire universe and spills over, speaking non-theologically (2 Chron. 2:6). Small wonder the psalmist declared,

Who humbles Himself to behold the things that are in the heavens and in the earth (Ps. 113:6).

Got the picture? Yes, you have. And because you are reading this, it is clear that you delight in confessing your insignificance and in worshiping the One who alone has infinite intrinsic value, Who willingly “stoops down” to watch your every step, count your every hair, and listen to your every prayer.

We should also observe that the discussion of the value of human life ought to be the proprietary right of believers in God. Those who believe that human beings are merely the result of mutations and natural selection logically should have no say in the matter. When the only thing that separates us from chimpanzees is a few genes, and the only thing that separates chimpanzees from, say, tree shrews, is likewise a few genes and so on in endless regression back to the Last Universal Common Ancestor, you have no basis for assigning any kind of sacredness to human life. Evolutionists should not grieve at the prospect of self-awareness disappearing through an adaptive evolutionary process, or even at the prospect of the extinction of Homo sapiens. The motto “No lives matter” should thrum in the very soul of evolutionists. 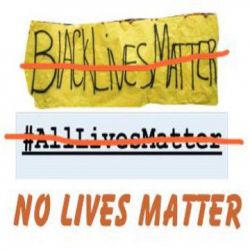